Another casualty of Covid19 was GC20, which was scheduled for 27 June.  The event had a full complement of stallholders and a programme of onstage events.  Like the first GC event in May 2019, there would have been plenty of opportunities to learn new skills such as crocheting or origami or just to watch a craftsperson decorating a cake, weaving on a loom or painting in chalk pastels.  Fingers crossed that there will still be an opportunity in the autumn or next spring to gather for this fun day of arts and crafts.

The scrapbook of memories of 100 years of Send Rec was completed.  Because it wasn’t possible to show the original at the Send Help volunteers’ lunch, the Rotary Club and the Over 60s as had been planned, 50 copies were printed for sale at £9.50 each.  To check if any remain, email sendartsandcrafts@gmail.com

Unfortunately the project to build a recycling bin on Send rec largely out of eco bricks had to be abandoned.  The lower part of the construction was made before the winter but sadly went walkabout twice (once ending up on the main road) even though it was originally tightly wired to the tennis court railings.  Then came Covid19 and SPC decided it was best to remove the bin entirely.  It seems extremely difficult to realise an eco-brick project in the UK.  If anyone knows of a successful one, please do let us know!

People had made red, white and blue bunting to display in public places for the VE Day anniversary.  Instead, they hung it in front of their own homes, where socially distanced tea parties were held in front gardens.

SendCrafts4U moved online and held Zoom sessions on many Tuesdays and Saturdays.  Here are some of the things made during those sessions, which it’s hoped can move back to the SEC Hall before the end of the year. 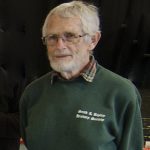