Towards the end of 1991 the Natwest Bank in Ripley finally closed. It had been the village bank next to the entrance to the Green since 1930 on the site which is now United Rental Group. The original Westminster Bank had purchased two early 1800s cottages there for £400 and had demolished them to make space for the new building.

Also in 1991, Send and Ripley History Society had been searching for a suitable building to establish a local history museum and the bank building seemed to be an ideal opportunity. At the sametime the Village Hall Committee under chairman Graham Jowett also had ideas for the building. I was chairman of the Society at that time and in agreement with Mr Jowett, made an approach to the bank. My late wife Bette and I were invited to the bank’s estates department in Crawley. We were very well received and were told that the bank was willing to give us the building but would we be able to move it! That was, of course, unless we were able to buy the site as well. The commercial value would have been impossible for us.

After a lot of head scratching, we came to an arrangement with the Village Hall Committee whereby we could have a corner of their site for our building. So plans were set in motion to decide what needed to be done to achieve our aim. The first question was how and we quickly decided to investigate the possibility of moving the building in one piece. After approaches to firms known to be specialists in moving buildings, most were found to be very expensive. We finally decided upon Vanguard Engineering, best known for handling large industrial machinery, and soon agreed upon how the job would be done.

The first task was to construct a new brick base on which to locate the building. Guildford planners were very helpful in this respect and we soon obtained planning consent for our project. The brickwork was done by local bricklayer Ray Townsend. While this was being done, it was necessary to prepare the building so that we could lift it. We had agreed that a mobile crane would be needed and that a lifting frame would be produced for this. So for some weeks a small team, mostly Les Bowerman, Derek Bromley, Ted Goldup and myself, laboured preparing the building by making spaces in the brickwork to enable steel beams to be inserted through for the lift.

The most important consideration was how were we going to pay for the move and everything else to get our museum up and running. Somewhat brazenly, I approached Lord Forte whose family country home was and still is Ryde Farm on Hungry Hill. He and Lady Forte were both very supportive and ultimately gave us £2000 towards the cost. We also benefitted from various other donations and raised much more with a giant raffle.

The move was organised for the weekend of 23rd/24th of April 1992, just 25 years ago. It was first necessary to liaise with the Police on the matter of closing the High Street when the journey was taking place. We had hoped to do this all on the same day but the Police decreed that it could only happen at 6.00am on Sunday morning. We also persuaded British Telecom to come at the same time to lift phone lines across the road to enable the very high load to pass safely without causing damage. Because it would be good publicity they did this at no cost. So on Saturday the contractor,Vanguard Engineering, arrived with all of their equipment and the 70 ton mobile crane was positioned adjacent to the bank on the land previously the White Hart Inn car park.

The preparation for the move was carried out for the crane to lift the building and place it on a low load vehicle. This took much of the day and it was 4.00 before the lift happened. Everything then had to be on standby until early on Sunday for the journey along the High Street.

Thanks very much to Alastair MacMillan who arranged publicity, we had very good coverage including the presence all day of an ITN news reporter and a cameraman. They could do very little until the actual lift happened and became very concerned about filming it in time for them to get back to London in time for the early evening ITN News. I suspected that they spent much of the day in our various pubs!

Everything all worked just as we had planned and with the lift happening there was a huge cheer all round. At that moment, I found myself before the camera uttering a few words, and then they were off to London with only an hour to spare to be in time for the news. They did it and I was on the air for about 15 seconds — my one moment of fame!

On Sunday morning everything went according to plan with the Police escort (car and motor bikes) leading the parade along the High Street. The BT technicians were there, armed with very long poles, to lift the phone cables crossing the street so that the load could safely pass underneath.

Actually, getting the load into the Village Hall car park presented a problem. It was straight away apparent that the layby in front of the Police Station (in those days, we had a functioning Police Station!) would be needed to get a sufficient turning radius. The problem was that some cars were parked there. With the Police asking us not to look, they broke into each and moved them out of the way. With the load safely into the car park, they moved the cars back to where they had been and, probably, the owners never knew!

The mobile crane followed the load and was quickly set up for the final lift. So it was a huge relief all round to see our new museum resting on its new base; even more so to find that it fitted precisely on the base.

Once all this was over, there followed over a year of preparation before we could open our door. We altered little inside but added a counter area and shelving. Most of this work was done very professionally by Derek Bromley. Electrical work was done for us by Guy Marshall.

When all was complete, a grand opening was held on 25th September 1993 and Lord Forte, accompanied by Lady Forte,
performed the opening ceremony. All in all, the project cost a little under £10,000 with, fortunately, only a small drain on the Society’s limited resources.

A couple of years later, we invited both Ripley and Send First Schools to prepare time capsules to place in the museum’s foundations. A ceremony was held in which children from both schools came to witness the placing of the capsules. 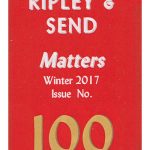 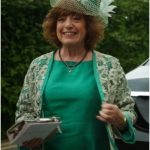